Note: all photos unless otherwise noted are copyright J.M. Garlock

Airboat rides are a lot of fun. Basically an airboat is a shallow draft, aluminum skiff that’s propelled by an airplane engine. They go fast, have a very short turning radius and can take most people to places in the Everglades where they couldn’t get to otherwise.

Feeding alligators is against the law. It’s a second-degree misdemeanor punishable by a fine of up to $500 and possible jail time. The reasons why alligator feeding is illegal are twofold: once an alligator associates humans with food it is much more likely to attack a human and it makes no difference to the alligator if that individual is feeding it or not. Often it’s the next person who comes along because the alligator has lost its natural fear of humans. Secondly most people can’t tell the difference between an American alligator and an American crocodile which is an endangered species. So alligators are protected even though there’s approximately 2 million of them in Florida. Death in the ‘Glades lurks virtually everywhere. When people feed alligators for whatever the reason it amounts to a virtual death sentence for the alligator.

Airboat owner/operators take people on rides for which the people obviously pay. The rides typically last 45 minutes to an hour. The owners have expenses such as maintenance, fuel and they share the cost of the ride with the owner of the facility who in turn provides dockage, advertisement, payroll services etc. In order to mitigate their expenses many airboat operators feed alligators because that’s what tourists want to see: an alligator coming out of the water and taking a fish proffered by the operator. The tourists tip more. Being undermanned officers of the Florida Fish and Wildlife Conservation Commission know the operators are doing it but they can’t be everywhere at once. In fact it’s common knowleerators feed alligators.  Not all of them do it of course but it’s easy to understand why an operator would.

On June 12, 20012 Wally Weatherholt, 63, took six Indiana tourists on a tour of the Everglades. He fed a 9-foot-long alligator that bit his hand off at the wrist. Wildlife officials tracked the alligator, killed it and removed the hand. Doctors at a local hospital were unable to reattach the hand.

A 12-foot-long alligator has a bite force, measured in pounds per square inch of 2,125. Some have been measured at 3,000 psi. By comparison a saltwater crocodile has a bite force of 3,700 psi and a great white shark 4,000 psi. So it should come as no surprise that Mr. Weatherholt lost his hand.  Even if the alligator didn’t bite it off cleanly all it had to do was to go into a death roll in which case the hand would have twisted off quite easily. Once an alligator clamps its jaws down on something it is alost impossible to get it to release its grip.

After the airboat passengers stated that Weatherholt hung a fish over the side of the boat and had his hand at the water’s surface Weatherholt was arraigned on August 22, 2012 . On October 1, 2012 Weatherholt had a nonjury trial and a pretrial conference is scheduled for November 6, 2012.

People who don’t operate airboats also feed alligators and in my next blog I’ll tell you their stories. I’ll also talk about a woman who didn’t do the right thing or the wrong thing and still lost an arm. 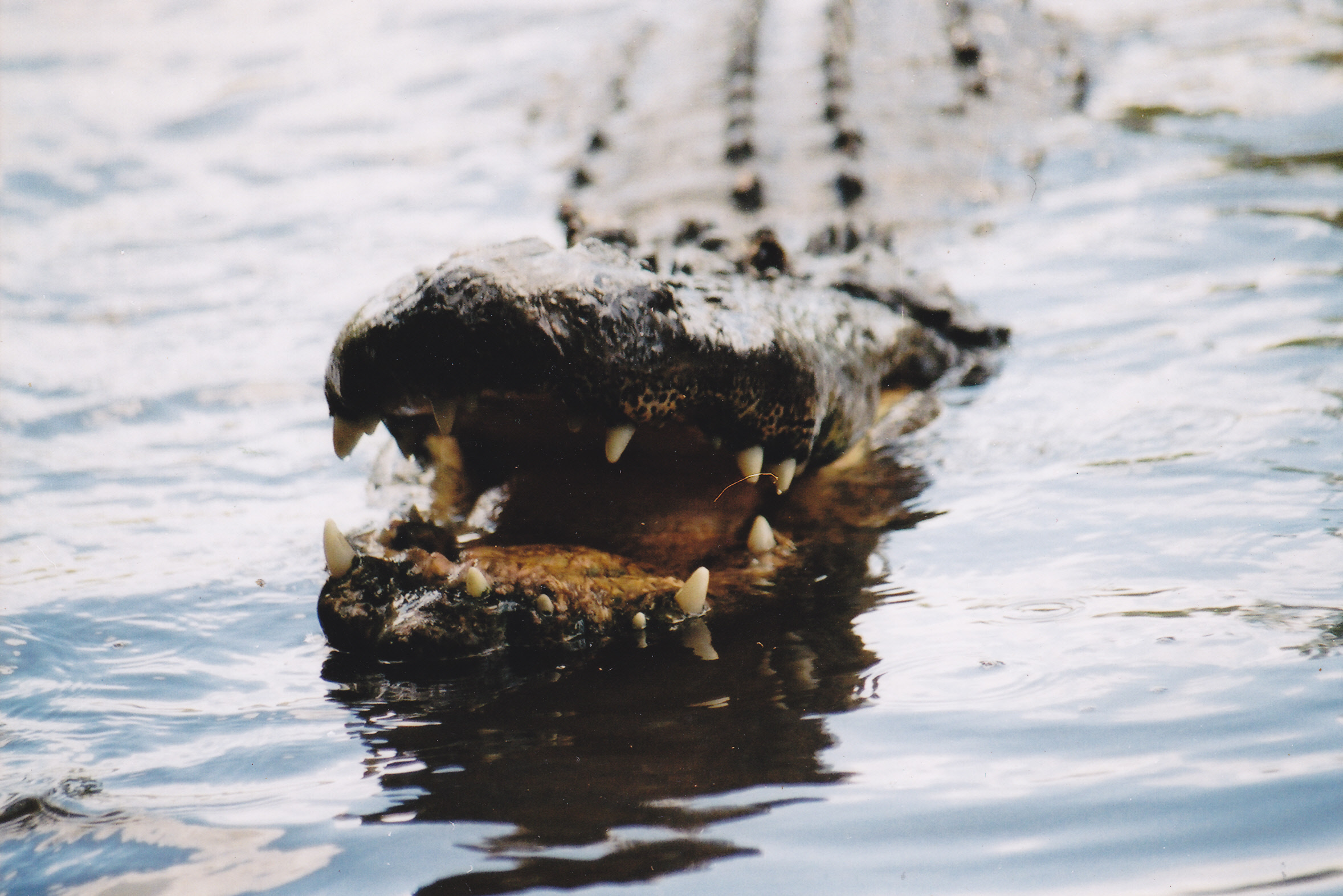 An alligator cruises along looking for something to eat